Seeking the Face of God: The Lives and Discoveries of Catholic Scientists

Seeking the Face of God: The Lives and Discoveries of Catholic Scientists

You are invited to meet the great Catholic scientists who paved the way for our modern understanding of science and faith. With your expert guides, you will explore fascinating questions of faith and understanding.

In Seeking the Face of God, two leading scientists from the Vatican Observatory debate what it means to be a practicing Catholic and a professional scientist. Tracing back across 1,000 years of history, you’ll reflect on the role of faith in science with Dr. Guy Consolmagno, a Jesuit brother nicknamed the “Pope’s Astronomer,” and h

You are invited to meet the great Catholic scientists who paved the way for our modern understanding of science and faith. With your expert guides, you will explore fascinating questions of faith and understanding.

In Seeking the Face of God, two leading scientists from the Vatican Observatory debate what it means to be a practicing Catholic and a professional scientist. Tracing back across 1,000 years of history, you’ll reflect on the role of faith in science with Dr. Guy Consolmagno, a Jesuit brother nicknamed the “Pope’s Astronomer,” and his friend and colleague Dr. Michelle Francl-Donnay, an award-winning professor of chemistry at Bryn Mawr College.

Beginning with a brief overview of the history of science, Consolmagno and Francl-Donnay highlight Catholic contributions to medicine, mathematics, computer science, astronomy, and chemistry before arriving at the question of our place in the cosmos.

While some, like Gregor Mendel, are famous for their discoveries, Consolmagno and Francl-Donnay introduce you to a host of fascinating Christians whose work you may be less familiar with:

The conversational format of Seeking the Face of God offers you a wealth of insight without the stuffiness of a traditional lecture. Muse on the interplay of faith and discovery with this pair of accomplished scientists and teachers. 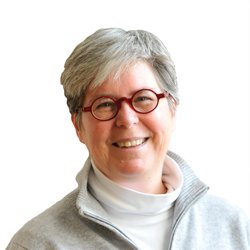 Michelle Francl-Donnay is an award-winning professor of chemistry and the chair of the chemistry department at Bryn Mawr College, as well as an adjunct scholar of the Vatican Observatory. She has been a fellow at Princeton University, the James Franck Institute at the University of Chicago, and the Beckman Center for the History of Chemistry. Trained as both a Roman Catholic theologian and a scientist, Dr. Francl-Donnay is an expert on the intersection of faith and science. She received her Ph.D. in chemistry from the University of California, Irvine, studied theology at St. Charles Borromeo Seminary, and completed her postdoctoral work at Princeton University. For her contributions to the field, she was elected a Fellow of the American Chemical Society in 2009.   Dr. Francl-Donnay is a quantum chemist whose research interests include molecular structure determination and the development of methods for computational chemistry. She is also an award-winning writer whose essays on the history and philosophy of science have appeared in Slate,Nature Chemistry, and several collections. Her reflections on prayer and Catholic spirituality can be found both in print and online; her most recent book is Not By Bread Alone. She is also a frequent contributor to the monthly prayer guide “Give Us This Day” and to the Philadelphia Archdiocese’s CatholicPhilly.  Praise for Michelle Francl-Donnay “Dr. Michelle Francl is the guide the world needs to the integration of the material world, ruled by the laws of physics, and the immaterial world, nurtured by the Spirit of God. With the mind of a scientist, the heart of a mystic, and a sense of humor that comes straight from God, she sees to the depths of the transcendent ordinary. With her help, we can find the mystery in the quantum structure of a burning atom, the human meaning of dirty dishes, or the poetic history of dust on a desk.”– Dr. Kimberly Belcher, Prof. of Liturgical Studies at Notre Dame University "Michelle Francl is a leading scientist and lifelong seeker who, like many of us, has glimpsed, if only for moments here and there, the face of God in ordinary life. She is able to write about it and talk about it in language that all of us can understand and benefit from. I can't recommend her work highly enough." – Michael Leach, author of Soul Seeing and publisher emeritus of Orbis Books.

Dr. Guy Consolmagno, S.J., is Director of the Vatican Observatory, a leading astronomer and meteoriticist, and a Jesuit brother. He earned undergraduate and master’s degrees from the Massachusetts Institute of Technology, and a Ph.D. in Planetary Science from the University of Arizona. Before entering the Jesuits in 1989, he was a postdoctoral research fellow at Harvard and MIT, served in the US Peace Corps, and taught university physics at Lafayette College. He has worked as a Vatican Observatory astronomer since 1993. Br. Consolmagno’s research explores connections between meteorites, asteroids, and the evolution of small solar system bodies. The author of a monthly science column for The Tablet, he has written more than 200 scientific publications and a number of popular books, including Turn Left at Orion (with Dan Davis), and Would You Baptize an Extraterrestrial? (with Paul Mueller). He has also hosted science programs for BBC Radio 4, appeared in numerous documentary films, and served as chair of the American Astronomical Society’s Division for Planetary Sciences. In 2000, the small bodies nomenclature committee of the International Astronomical Union named an asteroid, 4597 Consolmagno, in recognition of his work. In 2014, he was awarded the Carl Sagan Medal for public outreach by the American Astronomical Society's Division for Planetary Sciences.  Praise for Guy Consolmagno “Br. Guy Consolmagno is a gifted scientist, writer, and leader in helping people bridge their scientific and religious understandings of the cosmos. An engaging and entertaining speaker, Br. Guy has a rare talent for communicating abstract concepts to public audiences with remarkable clarity.”– Dr. Grace Wolf-Chase, Astronomer, Adler Planetarium  “Guy Consolmagno’s presentations are gems. Here is an accomplished scientist with strong interests in science’s history and in communicating science to a diverse public audience — he communicates skillfully to science enthusiasts but also humbly to those who have religious or cultural apprehensions regarding science.”– Prof. Christopher M. Graney, Author of Setting Aside All Authority: Giovanni Battista Riccioli and the Science against Copernicus in the Age of Galileo  “Br. Guy puts the lie to the post-modern canard that science is the replacement for religion, that one must choose between one's profession and one’s faith. He does this with humor, wisdom, and deep knowledge.”– Jonathan Lunine, David C. Duncan Professor in the Physical Sciences, Cornell University  “Brother Guy Consolmagno combines an active research career in planetary astronomy with a strong sense of history. He also inspires amateur astronomers the world over, and instructs a wide audience of armchair astronomers through his accessible popular books. He is a voice of authority and a source of enthusiasm for science.”— Dava Sobel, Author of Galileo’s Daughter

Be the first to review “Seeking the Face of God: The Lives and Discoveries of Catholic Scientists” Cancel reply