An Ignatian Retreat by Rev. Joseph A. Tetlow, S.J., Ph.D. 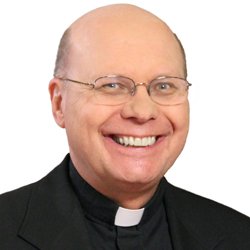 Fr. James Kubicki, S.J., M.Div., is the national director of the Apostleship of Prayer. In addition to being a frequent guest on radio and television, Fr. Kubicki is a popular conference speaker, retreat director, and parish mission speaker. His areas of expertise include the Eucharist, the Sacred Heart of Jesus, the Spiritual Exercises, and the practical spirituality of the Apostleship of Prayer. Fr. Kubicki has an M.A. from St. Louis University and a Master’s in Divinity and a Theology Masters from the Weston Jesuit School of Theology. He is the author of A Heart on Fire: Rediscovering Devotion to the Sacred Heart of Jesus (Ave Maria Press, 2012), which was honored by the Association of Catholic Book Publishers.
Fr. Kubicki has appeared on EWTN and is a regular contributor to Catholic radio stations throughout the country via the Relevant Radio and EWTN Radio Networks. A member of the Society of Jesus since 1971, he has served in various positions with the Apostleship of Prayer since 1995. Previously, he served as Vocation Director and Director of Formation for the Jesuits of the Wisconsin Province; Assistant Director of the Diocese of Rapid City’s deacon and lay ministry formation program; and the Assistant Director of Demontreville, the Jesuit Retreat House in Lake Elmo, Minnesota. He has also worked at the Sioux Spiritual Center, a retreat house for Native Americans in South Dakota.
Praise for Fr. James Kubicki
“Father Kubicki is a dedicated Jesuit priest who has the unique ability to present the truths of the Faith and the richness of our Catholic spiritual tradition in a way that brings true dynamism to the New Evangelization.” – Michael Wick, Institute on Religious Life
“People today struggle to stick to a life of prayer. Father Jim Kubicki has lots of experience guiding men and women on the right path. I recommend him as a sure guide in learning the joy and peace of prayer.” – Terrence Prendergast, S.J., Archbishop of Ottawa
“James Kubicki has oriented his ministry towards communicating the depth of love, forgiveness, and friendship symbolized by the Sacred Heart of Christ. In this apostolate he stands squarely in the tradition of Pope Francis, helping us learn how to walk securely and courageously in the way of the Lord.” – Howard Gray, S.J., Georgetown University