Video Bundle: What Does It Mean to Be Saved?: The Theology of Salvation + He Lives: The Passion, Death, and Resurrection of Jesus – 8 DVDs Total

What Does It Mean to Be Saved?: The Theology of Salvation by Fr. André Brouillette, S.J., Ph.D., S.T.D.

He Lives: The Passion, Death, and Resurrection of Jesus by Fr. Henry Wansbrough, O.S.B.

Looking for the Audio CD version of this bundle? Click here 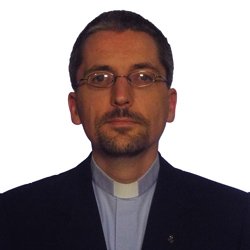 Fr. Brouillette then earned a Doctorate in Sacred Theology summa cum laude from the Institut Catholique de Paris, in addition to a Ph.D. from the Université Laval in Quebec City. His doctoral dissertation there explored the role of the Holy Spirit for salvation through the lens of the writings of St. Teresa of Ávila. It was later published as a book (part of the prestigious series Cogitatio Fidei) under the title of Le lieu du salut: Une pneumatologie d’incarnation chez Thérèse d’Avila (Editions du Cerf). He has published articles in various languages and lectured internationally.
Praise for Fr. André Brouillette
“André Brouillette’s deep training in soteriology is reflected both in his superb scholarship and in his accessibility as a teacher in the classroom. One of the rising stars of his generation.”
– Mark Massa, S.J., Boston College

“André Brouillette has developed a singular ability in reading narratives of salvation, both in the Bible and outside of it. He discerns in a unique manner how life narratives are permeated with biblical features and potentialities. The result proves to be very inspiring for readers and listeners.”
– Emmanuel Durand, OP, Dominican University College (Carleton University)

“André Brouillette, SJ, is a gifted systematic and constructive theologian whose expertise in spirituality and fundamental theology excites and inspires his students. Competent in several languages and the social sciences, his theology is devoted to imagining anew, Christian living and the church in our contemporary context of change and disruption.”
– Mary Ann Hinsdale, IHM, Boston College

Henry Wansbrough, O.S.B., M.A., S.T.L., L.S.S., is a celebrated biblical scholar, member of the Faculty of Theology in the University of Oxford, and the General Editor of The New Jerusalem Bible. A Benedictine monk of Ampleforth Abbey in northern England, he received an M.A. from the University of Oxford, a Licentiate of Sacred Theology from the University of Fribourg, and a Licentiate in Sacred Scripture in Rome. A member of the Pontifical Biblical Commission from 1997 to 2007, he has published more than twenty books, numerous scholarly articles, and more than a thousand book reviews.Fr. Wansbrough is currently the Chairman of the Trustees of the Catholic Biblical Association of Great Britain, the Alexander Jones Professor of Biblical Studies at Liverpool Hope University, and a member of the Anglican Roman Catholic International Commission. He has previously served as Executive Secretary of the International Commission for Preparing an English-Language Lectionary, Chair of the Oxford University Faculty of Theology, and Master of St. Benet’s Hall at Oxford. Fr. Wansbrough has taught and lectured in varying locations in the United States, Africa, Jerusalem, Australia, and continental Europe, and he has led annual academic tours of Israel since 1972.Praise for Fr. Henry Wansbrough
“Father Henry Wansbrough is one of the most erudite, well known and sought after Scripture scholars in the English-speaking world. His ability to unwrap the hidden depths of the Scriptures and to engender a deep desire for yet more is characteristic of an adept teacher and engaging preacher.”– Arthur Roche, Archbishop Secretary of the Congregation of Divine Worship & Discipline of the Sacraments or Archbishop Arthur Roche, Vatican City“Dom Henry Wansbrough, OSB, has for many years informed and enriched our appreciation of Sacred Scripture. His work is always of a high standard and is an outstanding service in the Church.”– Cardinal Vincent Nichols, Archbishop of Westminster“Dom Henry Wansbrough OSB is one the most distinguished biblical scholars in the Church. I am delighted that his lectures on the Passion, Death and Resurrection of Christ are being diffused worldwide and warmly commend them as works of excellent scholarship which will appeal to countless numbers of people.”– Cardinal Cormac Murphy-O’Connor, Archbishop Emeritus of Westminster

Be the first to review “Video Bundle: What Does It Mean to Be Saved?: The Theology of Salvation + He Lives: The Passion, Death, and Resurrection of Jesus – 8 DVDs Total” Cancel reply